Our main goal for this project was to explore different approaches and to experiment with an alternative forms for the archetypical model of the Cycladic Architecture yet respecting all the basic elements that comprise its character. The most important of the design decisions was to create a building that would blend in its natural environment.

What is the specific natural environment and what is it consisted of? The steep gravel and dirt slope, dressed with scattered wild thorny bushes, and with beautiful large rock formations. Most importantly though the short stone retaining walls, locally called “louria” or “xerolithies” that where created for land cultivation purposes. These walls about a meter or so in height formed flat stripes of land along the surface of the slope, like curved steps. This was our starting point! We imagined the facades (front and back) of the house being formed by “xerolithies” that stretch, not entirely parallel to each other, from one end of the plot to the other with a gentle ribbon like gesture dancing closer and away from the slope. To achieve this, all the spaces had to be placed sequentially making the house thin and long. 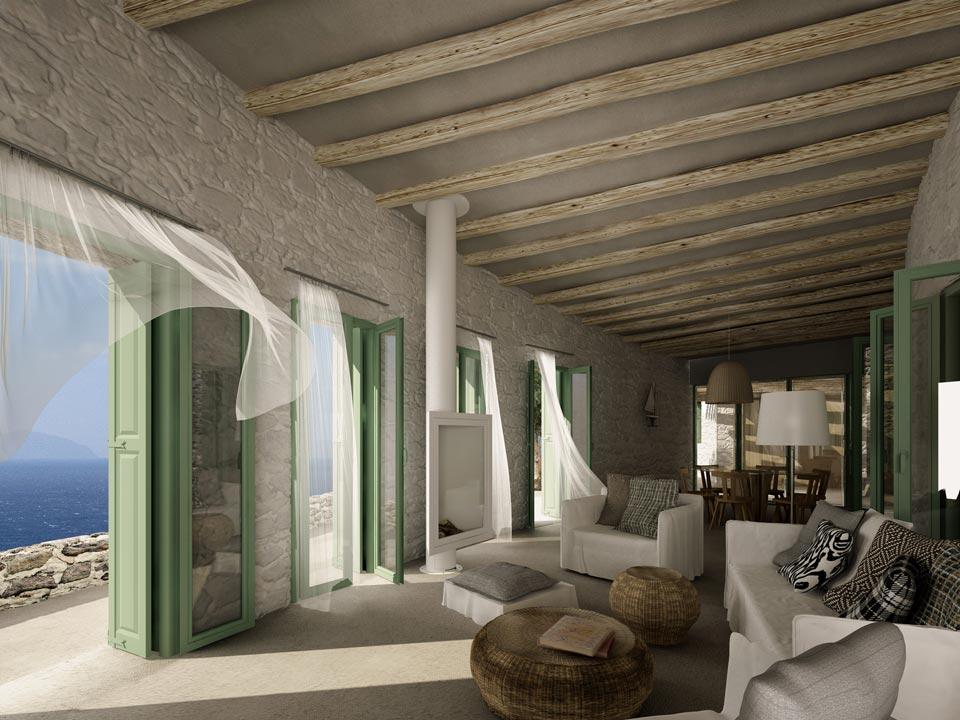 An awkward feature of the classic Cycladic house is the bear flat roof, especially when seen from behind and above. So the next decision was to make the roof disappear by integrating it with the surrounding natural surfaces. The roof will be covered with dirt, gravel, stone and wild vegetation. It has a slope (it’s not flat) to make it blend and seem even more natural.

Another feature of the Cycladic house is the wooden pergola, consisted of thick smooth round beams and columns with a top layer of bamboo. The same feature appears on the roof of the rooms seen from inside. Now instead of placing the pergola in the front of the house we decided that it should be placed along the linear sequence of the spaces. More specifically between the main house and the guest house. We imagined the wooden beams like vertebrae on a long spinal cord that follow (always vertically in plan) the movement of the house. They sometimes protrude from the stone wall creating a curved edge separate from the curve edge of the house that dance next to each and one within the other. The parking (another awkward feature) is covered (and thus hidden) with an exactly same pergola.

The altogether design gesture seems a gentle one forming a house that enjoys the breathtaking view of the sea, while being as inconspicuous as possible, almost invisible.