A Greek garden for Greece?

A Greek garden for Greece?
The Greek Garden achived the bronze metal  IGA 2003

by A. T. Paraskevopoulou Gibbins

For the full article see The Mediterranean Garden No 47, January 2007

“Between 25th April and 12th October 2003, Greece was one of 24 countries participating in the International Horticultural Exhibition (IGA) in Rostock, Germany. The main objective of the Greek participation was to produce a traditional Aegean Garden. This Aegean Garden was such a success that it won the third place and received praise from its visitors.”
Views of the exhibition garden: 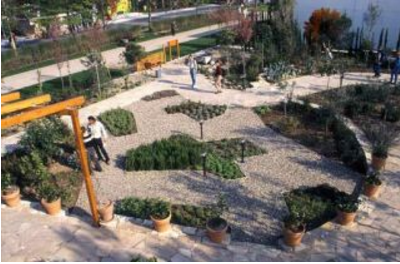 Another view of the path and gravel in the aromatic garden