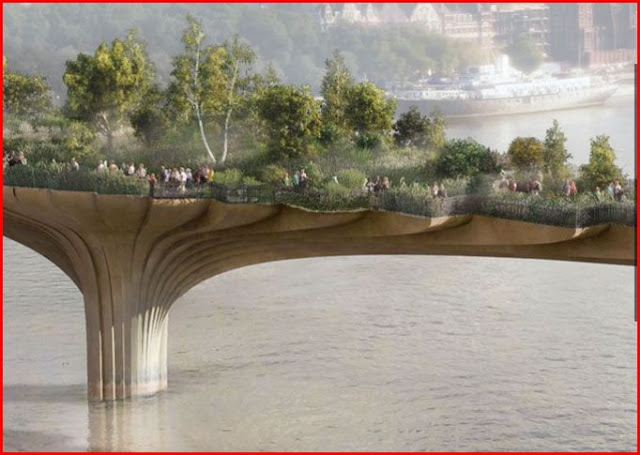 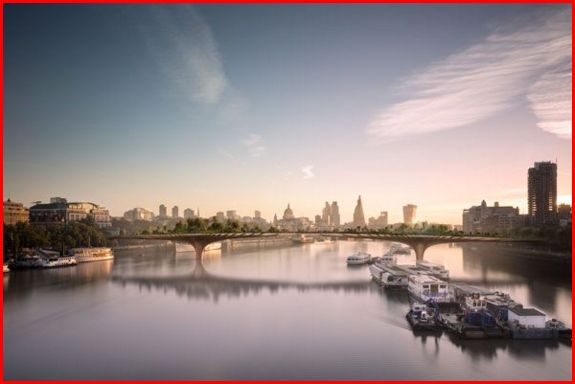 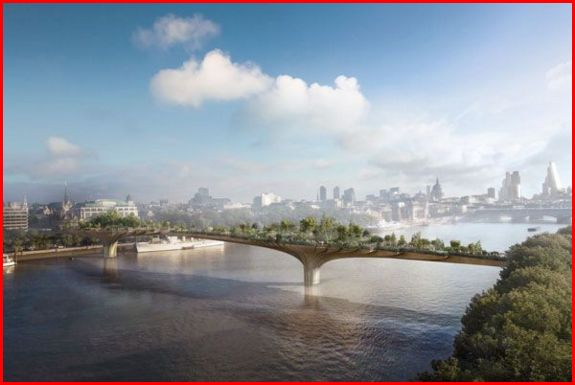 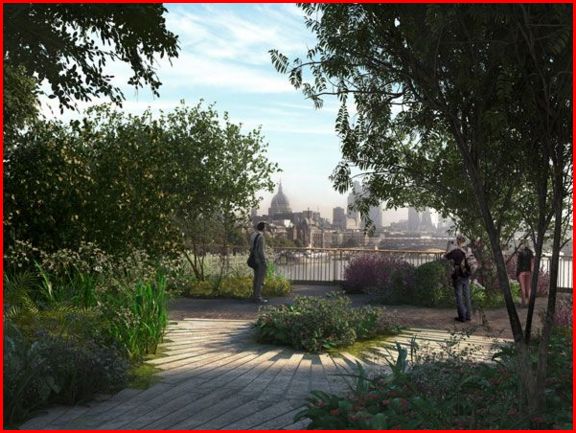 A Groundbreaking Garden Bridge Over Thames to be Developed in London

A new approach to designing bridges and traffic routes leads to one of the most controversial projects in London: a garden bridge over The Thames. A project that will increase the global attractiveness of the city as a tourist destination, say officials. The blueprint of this project has been approved by Boris Johnson who has served as Mayor of London since 2008 and is championed by British national treasure Joanna Lumley.
The London Garden Bridge project has been designed by Heatherwick Studio, and is intended to be a new pedestrian bridge that links the Temple Underground Station with the South Bank over Thames. This idea follows Transport for London’s trend for projects that improve pedestrian links across the river. London is already one of the greenest cities of its size in the world, and a project like this will be another iconic trademark.

No to cycling on bridge over Thames

This innovative project will be an important pedestrian route between north and south, that will feature plants, trees, woodland and meandering walkways to be used and enjoyed by all pedestrians. The ambitious project, lead by The Garden Bridge Trust, will enrich London’s diversity in landscape and technology. Unfortunately, on this new bridge cycling will not be permitted.

Garden Bridge. Image credit: ARUP
South Bank already attracts a large number of visitors to its art galleries, theatres, music halls and restaurants. The bridge’s structure widens and narrows and will be the groundwork for a new kind of suspended garden. Visitors, commuters and tourists will not only walk safely on this bridge but will also have special places to stop and admire the remarkable waterfronts and the river setting. For this purpose, there will be a series of viewing balconies radiating from the primary paths.
Awesome Bridge Related Articles That You Don’t Want to Miss:
Planting on the Bridge
The Garden Bridge project claims lands on both the north and south banks of the River Thames within the City of Westminster and the London Borough of Lambeth. The garden planted on the deck of the bridge will be a mix of 270 trees (approximately 45 species), shrubs, herbaceous plants, climbers, perennials and grasses (both native and non-native species).

Garden Bridge. Image credit: ARUP
The Garden Bridge will be supported by two piers that will be predominantly used for tree planting and lower growing species. The trees on the bridge would be managed to ensure no tree exceeds 15 m in height. The superstructure of the bridge would hold the soil and subsoil to support the garden at bridge deck level. The soil depth would vary from approximately 2 m to 0.3 m.
The Garden Bridge in Numbers:
• the extent of the bridge span: 366 m
• the width of the bridge varies from 30 to 6.5 m
• The width of the footpath: 4 m
• numbers of piers: 2
• area of the garden on the bridge: 6,000 sqm
• number of users a year: 7 million
• estimated cost: £ 175 million
• estimated public investment: £ 60 million
• estimated cost per garden sqm: £ 20.000
There is a lot of opposition to this project, which has raised many questions regarding the high cost, the environmental impact, and what will be gained by implementing this project. Supporters of the project already imagine themselves walking in this dreamlike garden. Citizens from both sides of the Thames are concerned about the crowds of tourists who will invade their neighborhood, whilst the authorities are keen to see this project started.
It’s a very tough task to anticipate if the key strengths of this project outweigh the the weaknesses. But what is for sure, beside the fact that the construction of the bridge is being challenged, it’s that Heatherwick Studio made us all dream about a walk on this futuristic bridge.
Αναρτήθηκε από Κων/νος Ζορμπάς στις 7:15 π.μ.