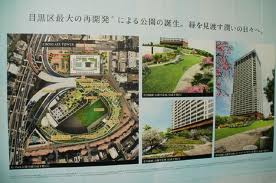 Rooftop oases in the big city


Hitoshi Ono / Yomiuri Shimbun Staff WriterRooftop gardens have always offered a sanctuary in the Tokyo metropolitan area, but unlike those of yesteryear, which were simple, flat areas featuring plants and trees, today’s more elaborate gardens are built like forests or along vertical spaces.
In spring last year, Omohara no Mori opened on the rooftop of the Tokyu Plaza Omotesando Harajuku commercial complex in Shibuya Ward. Tall trees such as Japanese zelkova and katsura (Cercidiphyllum japonicum) are planted in a basin-shaped area of 820 square meters, forming a garden that looks like a forest. One garden display is outfitted with a counter and chairs along its six sides, allowing visitors a view of trees as they relax with a cup of coffee.
“Many businesses in this complex target young customers, but the rooftop is for everyone including families and elderly people,” a Tokyu Plaza spokesperson said.

A 55-year-old woman living in the neighborhood said: “I’m happy because it feels like I live in the suburbs with nature, even though I’m still in Tokyo. I come here once a week to chat with friends.”
At the end of March, Meguro Sky Park opened above the Ohashi Junction of the Metropolitan Expressway in Meguro Ward. The top of the spiral highway was converted into a 400-meter-long park varying in width from 16 to 24 meters. With about 1,000 trees and 30,000 flowers, the 7,000-square-meter oblong park is designed as a place to go for a walk. The vertical distance between the park’s highest and lowest points is 24 meters, and Mt. Fuji can be seen from the top.
According to the Meguro Ward government, the park’s developer, many visitors are senior citizens and families with children.
“There is so much greenery here, and unlike street level, I can hardly hear the noise of traffic. It’s so quiet and relaxing,” said a 39-year-old woman at the park with her 3-year-old son.
The 260-square-meter garden at Seibu Railway Co.’s Tokorozawa Station in Saitama Prefecture takes advantage of its rooftop view. Railroad tracks are installed as a lawn decoration, while the park offers a view of real, working trains running in the distance.
Many tourists have taken advantage of the 1,500-square-meter rooftop park of Kitte, a commercial complex that opened this spring in Chiyoda Ward, Tokyo, to watch the bustle at nearby JR Tokyo Station.
A number of rooftop parks have been built to ease the “urban heat island” phenomenon in which big cities see abnormal rises in temperature.
Some local governments require developers that construct or renovate buildings to plant trees on the rooftop if the buildings are over a certain size. They also financially support developers’ greenery projects.
According to the Land, Infrastructure, Transport and Tourism Ministry, the total area of rooftop greenery was 130,000 square meters in 2000. The figure had surged to 3.3 million square meters in 2011.
Kaoru Matsumoto, a representative of Okujo Kaihatsu Kenkyukai, a nonprofit organization which studies rooftop garden development, said, “Most rooftop gardens used to have only grass, but recently there has been more diversity.
“There is little land available to plant trees and flowers, especially in metropolitan areas. Therefore, rooftop parks are necessary as a community gathering place to relax. I expect the greenery trend will continue.”
ΠΗΓΗ: http://the-japan-news.com
Αναρτήθηκε από Κων/νος Ζορμπάς στις 12:52 π.μ.